This is a real thing.

This is not a joke.

This is not a hoax.

Thrifty’s Ice Cream is BACK!!!!

Now, for some of yall, this may not be news. It may not even be that important to you. You’re just gonna hafta deal with my enthusiasm. DEAL WITH IT! I’m superbly excited and a tad emotional about this.

I actually cried (a few tears, not a lot… but a few) when I saw the results of a random Google search. I was talking to a coworker – we were talking about all kinds of other stuff and we somehow were talking about old stores that used to be but closed down… FedCo, Woolworths, Thrifty, etc.

For non-West coasters Thrifty is a drugstore type retailer. They had a photo department, pharmacy, and a full serve ice cream department. 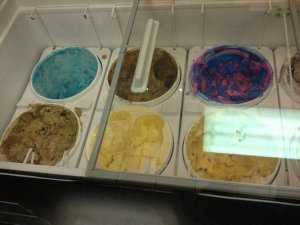 Then I started in about the ice cream at Thrifty, now Rite-Aid – but now I’m definitely gonna keep calling it Thrifty. Thrifty had the BEST ice cream. I told her how it used to cost $0.25 for a scoop – an extra 10 cents for a sugar cone. And as I got older, the price kept increasing. It went from a quarter to $0.40 to $0.50 to $0.59 to $1 to almost $2. Thrifty’s ice cream pricing for me is like your parents telling you they remember when a loaf of bread was $0.15.

Mmmm… just thinking about it. I love ice cream…theirs is pretty high up on the list. Like maybe #2 or #3. I haven’t given thought to my #1. Another post for another day. (Talenti is gelato, not ice cream. This matters.)

The scoop they used at Thrifty wasn’t a typical rounded one – it created this cylindrical shaped scoop.

And when they sold it by the pint/quart, it came in a rectangle. It looks like they’ve changed up the packaging, but I remember the rectangles.

So randomly, I was like, let me see if I can Google it to show you how awesome it was. Google has pictures of almost any and everything. I just knew I could find a couple of old pictures to show her.

And that’s when it happened. Google came through for me. It listed addresses for two stores in Nevada. One Henderson and one in Las Vegas. Now… I remember in the 90s when all Thrifty stores changed over to Rite-Aid. So this got the wheels in my head clicking… and then I started clicking on more links. There were pictures with the Thrifty logo. And then there were pictures of what looked like a storefront.

So then I went to Yelp and that’s when the tears came. These stores are REAL. The ratings were recent. And based on the flavors listed in the review – Pineapple Coconut & Daiquiri Ice – I knew it was real.

My next trip home will include a Vegas run. Sure, I miss Vegas. I’ve been told not to go to Atlantic City since I’ve had Vegas in my backyard. I’ll hit up a casino and buffet or two, the outlets, and a few other Vegas staples. But now, I’m completely motivated to get my hands on some Thrifty’s ice cream. 3655 S Durango Drive, Suite 19. Las Vegas, NV 89147. Meet me there!