I’m at work covering lunch for a coworker. I’m perusing the internet and I come across this link ‘Boy asks Santa to stop sister’s bullying’ and I pause. I would usually pass over a story like this and head straight for the sports updates. I was a tad annoyed at some things going on at work. But after my post about paying it forward, I just had to click and see what was going on.

I almost cried at work.

A single mother asked her 8 year old twins to write letters to Santa. She started early so she could start saving. Ok, I like it. She’s trying to make it work. She’s budgeting and planning to be financially responsible. I smile and I’m like great. Then the story goes on to say her son originally asked for some toys but then changed his mind and asked Santa to stop his sister from being teased at school. I definitely ‘awwww’-ed and thought about how amazing that must be to have a brother ask for that.

Then there was the picture and the letter. 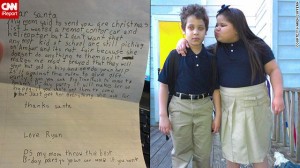 (if you cant read the letter, click it for a better view)

That’s when I almost lost it. No tears technically fell, but my eyes most definitely watered.

I wish I was rich, famous, and had the ability to pull strings. I would find a way to invite whatever kid’s television group that is to show up at the sister’s birthday party AND get him all of the remote controlled cars and helicopters his heart desired. Sigh.

It felt good to see that all parents these days haven’t lost their ever loving minds when it comes to raising children. Because a whole bunch of ’em have. But that’s a rant for another day. I hope the mother does address the teasing and bullying with her daughter. Kids can be cruel and the daughter has to know that it gets better in spite of the horrible little snotty nosed brats that she’s dealing with now.

And if you happened to be the parent of a horrible little snotty nosed brat…hmmph.